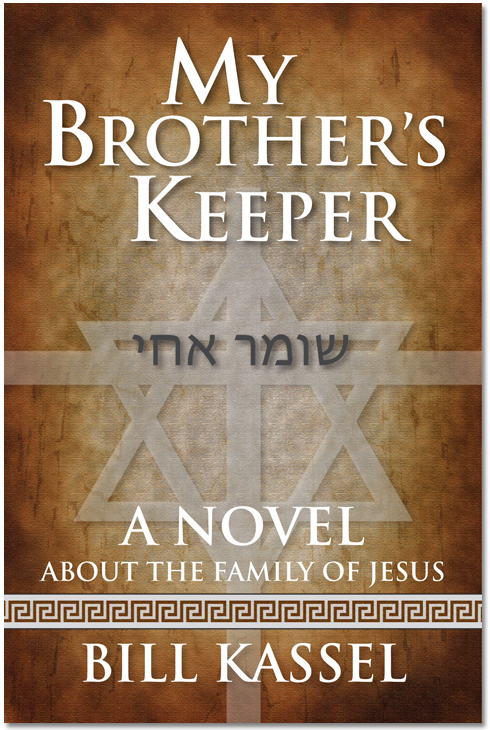 Stubborn Things, a popular online journal to which I’ve contributed several articles, has posted a review of my new novel, MY BROTHER’S KEEPER.

The piece is by Diane Osbourne, a lay religious education instructor who has a deep love and extensive knowledge of Holy Scripture. For many years Diane has conducted adult Bible study classes at St. Anthony Parish in Hillsdale, Michigan, developing her own curricula and instructional materials. She very kindly provided advice when I was writing my book.

Here are her complimentary reflections…

Christian author Bill Kassel has written a fascinating book — as its subtitle indicates: “a novel about the family of Jesus.”

This is the story of an unconventional family, shaped by supernatural circumstances but remaining solid and nurturing for its members. Most characters and events are from the Bible, deviating in no way from the scriptural text, but fleshed out and brought to life by the faith and imagination of the author.

For those accustomed to thinking of the Holy Family as made up of only Jesus, Mary and Joseph, the image of a “holy family” comprised of these three plus several other sons and daughters, their spouses, and grandchildren requires a mental adjustment. Once that shift is accomplished, however, the picture of the loving blended family with the sibling who doesn’t quite “fit in” will strike a chord with many present-day families.

Kassel did extensive research into the political, religious, and social background of the story. As the main character, James (“the brother of Jesus,” as the Bible describes him) relocates from Nazareth to Jerusalem, the reader is drawn into the struggle and turmoil of a country united in its faith in God but led by a mostly corrupt priesthood and dominated by a brutal foreign power.

James becomes a “man in the middle,” a rabbi who lives his faith actively as he ministers to his people while always striving to fulfill his promise to his father Joseph to protect his brother Jesus. At the same time, as a trusted and respected public figure, he becomes an unofficial adviser to Pilate, the Roman governor of Judea.

Pontius Pilate is a major player in Kassel’s story. In the Bible he is, for the most part, the pragmatic Roman authority who sentences Jesus to death because it’s the easiest thing to do. Kassel gives us the background of Pilate’s dilemma, showing the man’s efforts to both maintain his favor with Rome and deal with the Jews while struggling to understand their religious mentality. His efforts to placate their hatred of him and his Roman troops backfire, adding fuel to the smoldering hatred of the Zealots. Pilate “can’t win for losing.”

Biblical scholars and commentators sometimes speak of the importance of minor background characters who give insight into the meaning of a biblical narrative. Kassel lifts Joseph of Arimathea from the pages of Scripture and gives him a supporting role in the story of James. Gamaliel, the teacher of James (and later St. Paul) likewise plays a part. The lovely Avigail springs from Kassel’s imagination but enriches James’ life profoundly. James’ fellow student Jedediah is a fictional character who leaves the story but then returns in a most surprising way. Saul of Tarsus (St. Paul) has a “cameo” role.

And there is James himself, of course, a minor biblical character who here jumps off the pages of Scripture and into the center of his own story.

One might expect that, since anyone who has read the Bible knows how that story ends, there would be little incentive to keep turning the pages. For this reader, at least, the book was hard to put down. It’s a tribute to the skill of the author that the characters are so believable and robust that one becomes emotionally involved with them.

Although the events are set two thousand years in the past, there is an almost modern feel to the narrative. The complex characters, both public and domestic, could have stepped out of our lives, and the horror and cruelty of political repression are all too familiar in our time.

I have found that when a work of artistic endeavor, be it music, a movie or play, a novel, a painting — whatever — brings scriptural characters and narrative out of the pages of the Bible and into a real-life format, the result is always a boost for my faith. “Yes! It could have happened that way!”

This novel is no exception.

My sincerest thanks to Diane Osbourne and Stubborn Things.

For further information about MY BROTHER’S KEEPER and how to obtain it, click here.